Digital protocols to optimize, communicate and secure all information regardless of the application domain.

SGDL Innovation SA is a Research and Development company specialized in new digital protocols to optimize, communicate and secure all geometric and graphical information regardless of the application domain.

SGDL relies on proprietary theoretical results to design the communication architectures of the future for all geometric data, graphics and more generally for spatial data structures and the intelligence attached to them.

Involved since its creation in 1984 in large-scale international projects, SGDL is now focused on building and exploiting the first portfolio of patents dedicated to the processing of n-dimensional data and their security.

SGDL offers three types of solutions, intended for users of large and complex spatial and hyperspatial data structures, in particular geometric and graphical.

The common denominator of these solutions is to minimize storage memory space, optimize processing and communication times of spatial information and preserve if available the intelligence of the information associated with geometry.

New methods of indexing, coding and encrypting information also make it possible to physically and logically accelerate access to stored information and secure it.

The common technological denominator of SGDL solutions lies in the development of a universal format for representing geometric data based on the concept of large polynomials.

The various research works of SGDL aim to break down the technological barriers of mathematical and algorithmic nature that hinder the emergence of unified protocols for transmitting geometric and graphical information.

MATHEMATICAL REPRESENTATION OF SURFACES AND VOLUMES

Unifying geometry, graphics, and physics is algorithmically possible through particular mathematical equations that can serve both as a universal descriptor of spatial forms but also allow them to be visualized and simulated for their physical behavior.

These equations, which take the form of large algebraic polynomials, allow in particular to envisage interoperability between CAD / CAM, GIS, AEC and Robotics systems through a universal format of 3D data designed for high-performance computing linked to large spatial data structures. The SGDL technology benefits from the full power of the Polynomial Geometry .

SGDL offers new methods for optimizing the processing of spatial and geometric data structures through new paradigms for organizing and accessing spatial information.

This expansion is explained by the presence of numerous geometry problems involving topology, combinatorics and graph theory in different fields of computer science and by SGDL’s ability to develop transversal solutions that optimally respond to the domains in question.

Thus, in recent SGDL technology advances, the encoding of any alphanumeric data has been reduced to a general problem of hyperspatial combinatorics.

The principle of expanding non-specifically geometric problems to purely geometric questions can thus be parallelized with the modern encryption of alphanumeric data from elliptic curves.

The tools and solutions of a geometric nature are also inseparable from the problems of processing and visualizing general multidimensional or spatio-temporal data and complementary to the field of SPATIAL INDEXING.

These sectors are therefore now considered as potential markets for SGDL technology.

Through new formalisms of modelling, representation and treatment of spatial data, SGDL solutions are at the core of new generation simulation systems.

The concept of hybrid digital twin is at the core of new modelling, simulation and robotics systems from SGDL.

Faced with the problems of heterogeneity and massive discretisation of geometric and graphic data, in particular in the form of sets of polygons or points, traditional technologies do not allow today without degradation or simplification and transformation of spatial information to assume the treatments of a complete simulation chain.

The originality of the digital twin proposed by SGDL lies in the creation of a central geometric database called hybrid, which ensures all complex geometric, graphic and physical treatments thanks to a single representation of spatial information based on new mathematical and computer concepts.

Traditional satellite digital twins can be associated with it, their own databases being in this case subordinate to the new generation centralized database.

SGDL is tackling the algorithmic complexity of geometric and graphical databases and their processing through different parallel computing paradigms.

Unlike traditional approaches to manual or automatic parallelization of preexisting code, SGDL attacks the theoretical foundations of algorithms and the naturally parallel structures of these algorithms.

This approach requires a rethinking of traditional mathematical methods of research and algorithmic investigation. The development of new algebraic tools, particularly in the field of hyperspatial geometry, accelerates the process of developing new generation algorithms that are pre-optimized for the different architectures of current and future parallel machines.

The main issues addressed are as follows:

The ordering of sequences of integers is the first goal of the indexing coding methods. The applications are wide ranging from linear algebra, algebraic geometry, graph theory to lexicographic and alphabetical classification of dictionaries or to the enumeration and positioning of combinations in game theory. Routing problems between server architectures and interconnections of parallel processors often find their solutions in indexing. The addressing of data and their storage areas in databases or data structures is the basis for access to digital information and its structuring.

The interest of coding information by indexation is to free oneself from any physical organization of memory, prior to the manipulation of data.

The indexing coding systems developed by SGDL are particularly well suited to electronic identification as they facilitate, among other things, alphanumeric sorting and allow quick identification in databases. Modern cryptography systems often rely on mathematical encoding or coupling functions.

The indexing functions developed by SGDL uniquely ensure reversibility coding-decoding in the different processes of cryptography, cryptographic hashing or generalized encryption without losses.

We live in a digitally connected world. Most digital data: text, sound, images, positions for geolocation etc… have their own communication standards that allow them to be interoperable.

Our next challenge is to transmit a unified and universal description of the geometric and intelligent world that surrounds us. This description of shapes and objects is often sensitive and strategic; it must be secure, highly compressible and allow for encoding-decoding speeds close to real time.

The goal is to define a lingua franca able to carry any geometric and graphic information between digital and industrial actors that are dependent on spatial information.

This lingua franca must be compatible, interoperable and complementary with international visualization or modeling standards such as OpenGL (WebGL), Step, CityGML, IFC, STL / AMF…

The various research works of SGDL aim to break down the technological barriers of mathematical and algorithmic nature that hinder the emergence of unified protocols for transmitting geometric and graphical information.

Space-Filling Curves (SFC) are mathematical models of curves used today universally to index, encrypt and compress textual or visual information and generally multidimensional data sets. These curves are today the basis of a large number of spatio-temporal indexing systems for robotics, mobile applications, image processing, real-time geolocation, theory of spatial databases, design of distributed or parallel architectures, communication of information (Gray code) and many other domains including design of memory architectures, 3D printing, acceleration of neural networks, genetics or architecture of the Web. Google’s mobile geolocation APIs (S2 library) are an example of an SFC indexing based on a particular type of SFC: Hilbert curves.

SGDL has generalized the main Space Filling curves and has a powerful library of algorythms in open source and for licence solutions. SGDL technology is a multidimensional SFC–based spatial indexing system that can manage, identify, geolocate, and coordinate in real time the different mobile actors circulating in the mathematical city: human beings, autonomous ground robots, drones, mobile 3D repair printers, and connected objects in general. Such a system can easily be interconnected with the classic SFC systems used (Hilbert, Morton) by the most used industrial or open–source spatial databases. 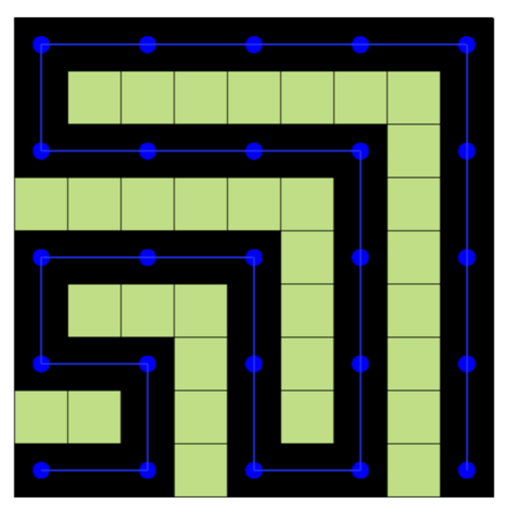 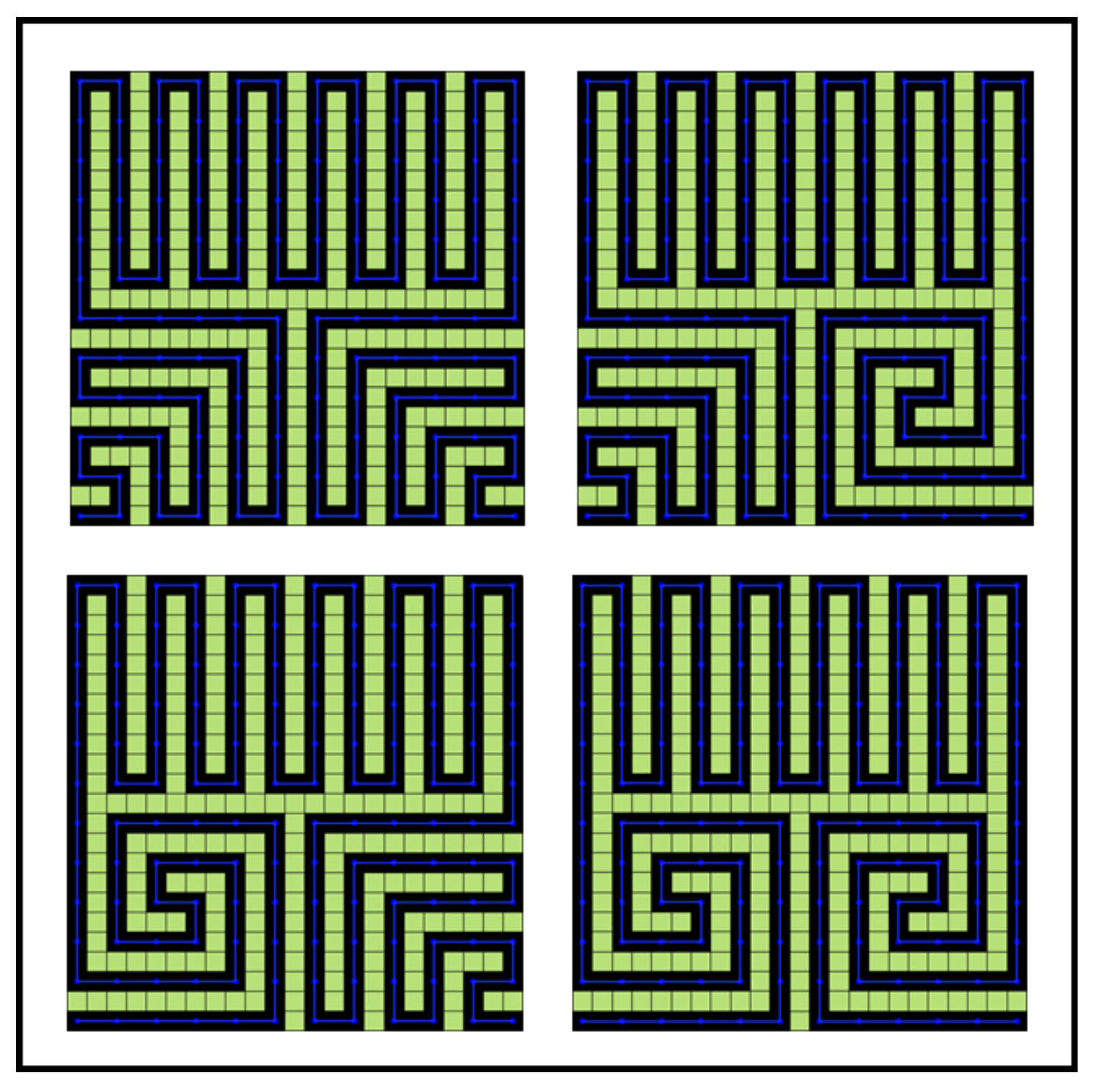 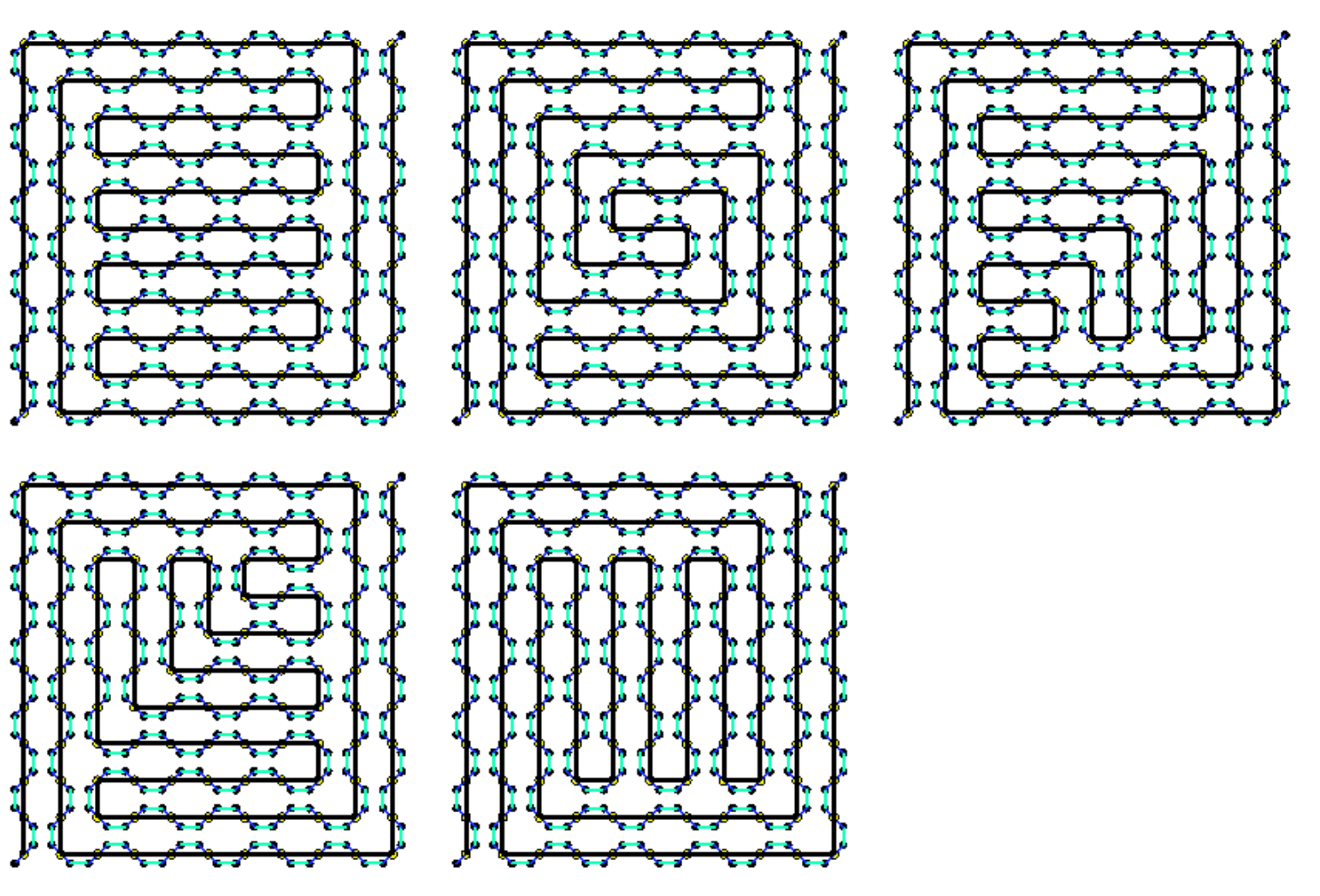 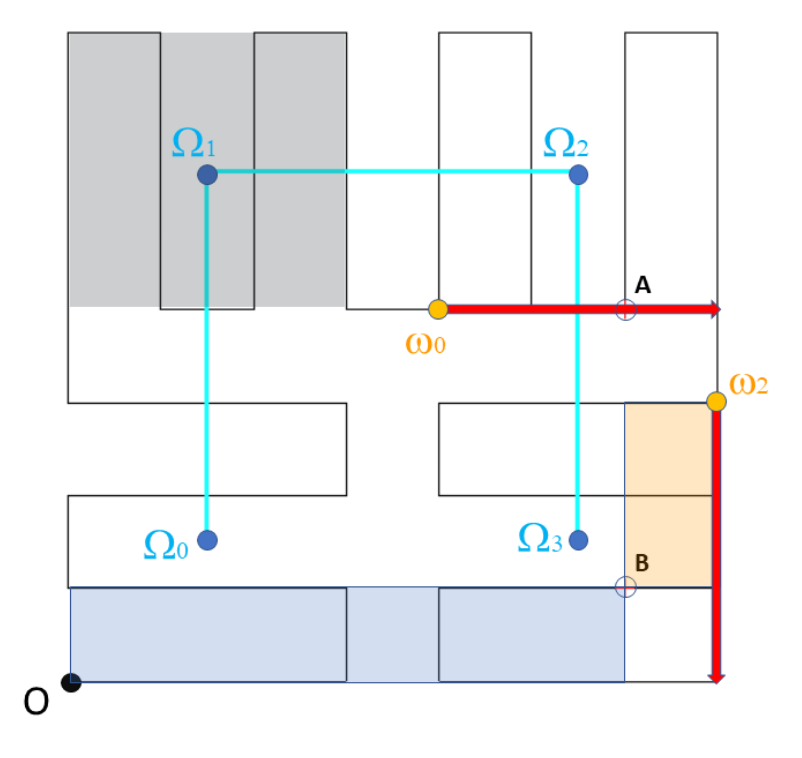 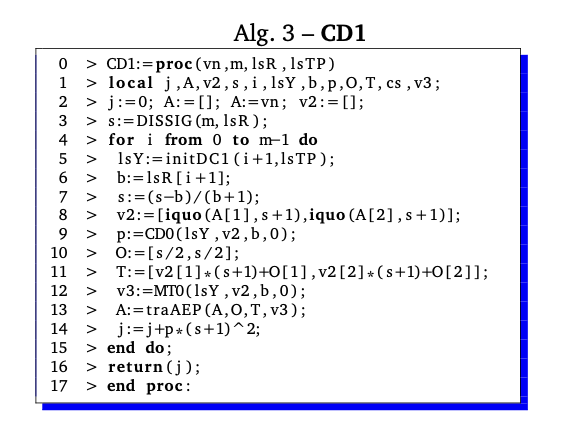 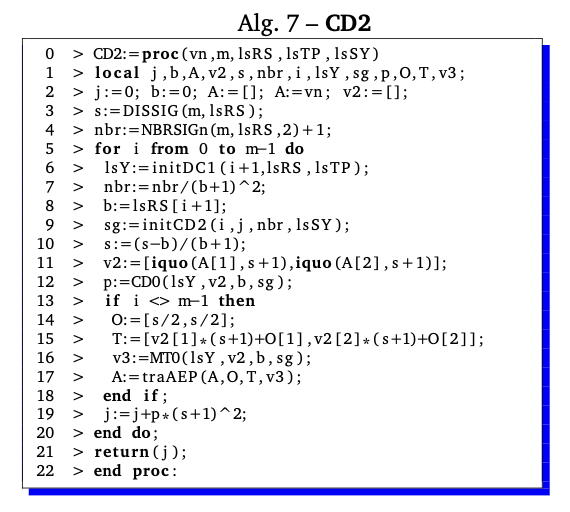 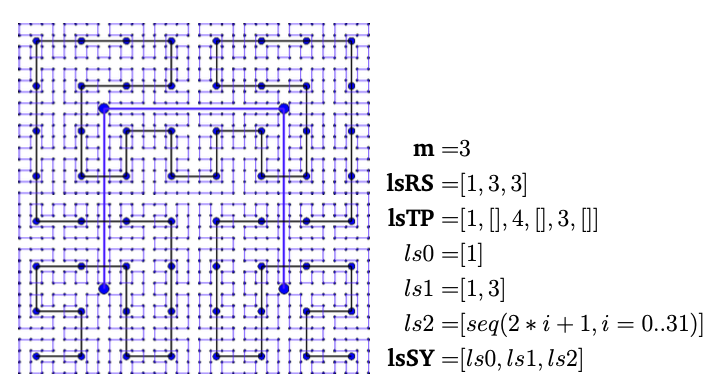 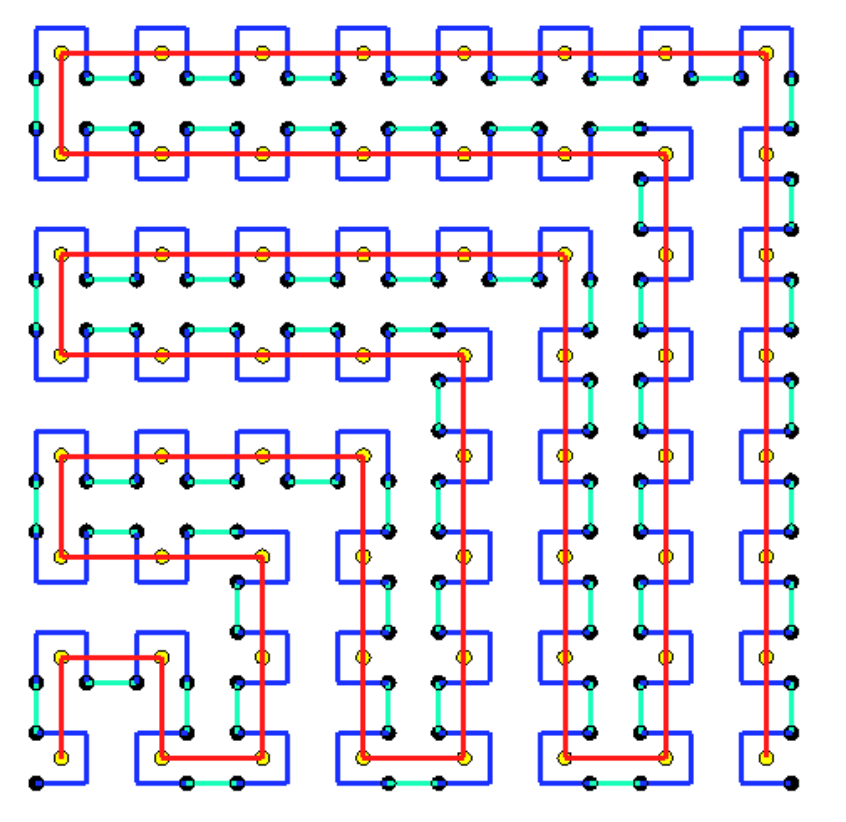 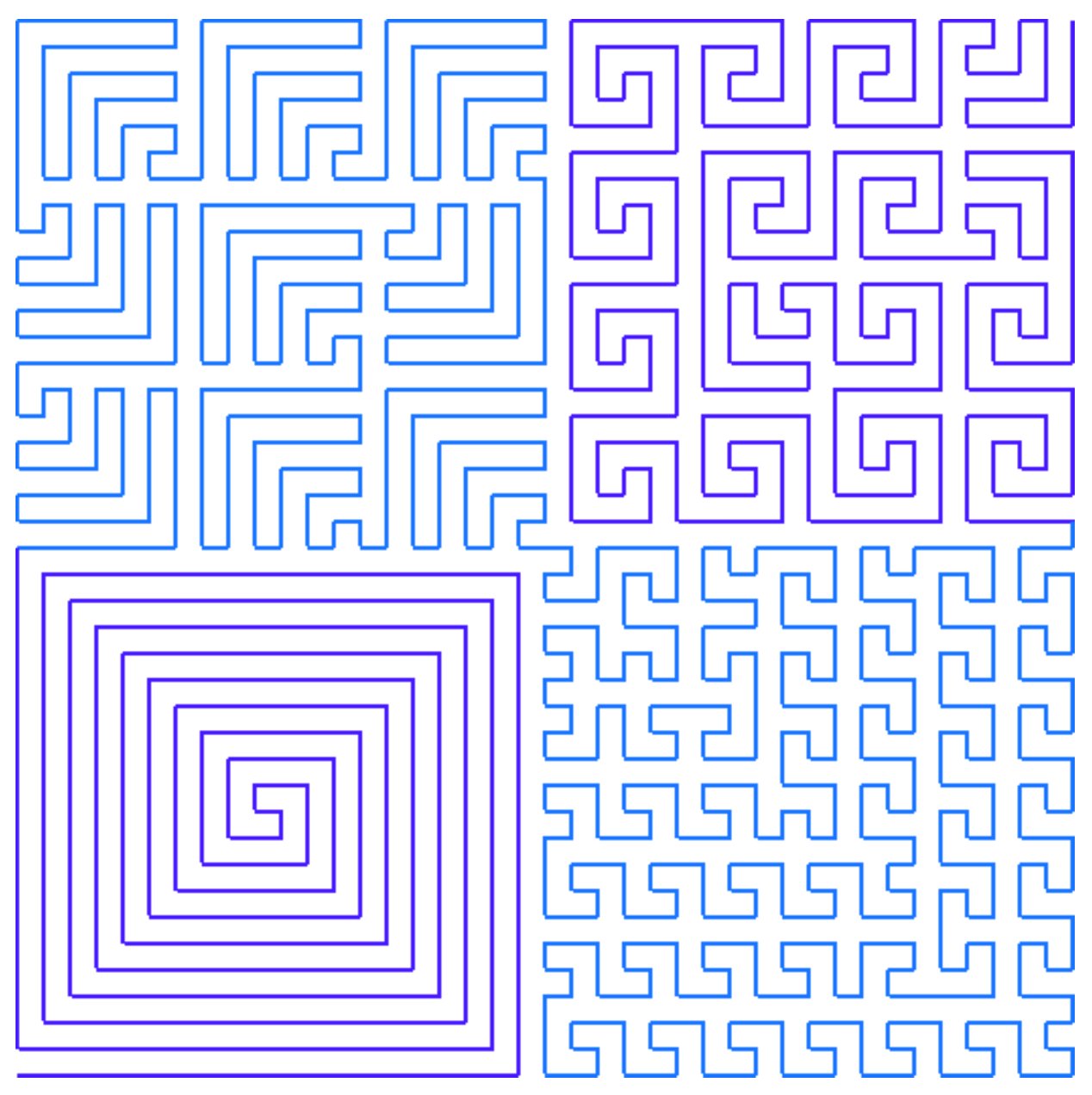 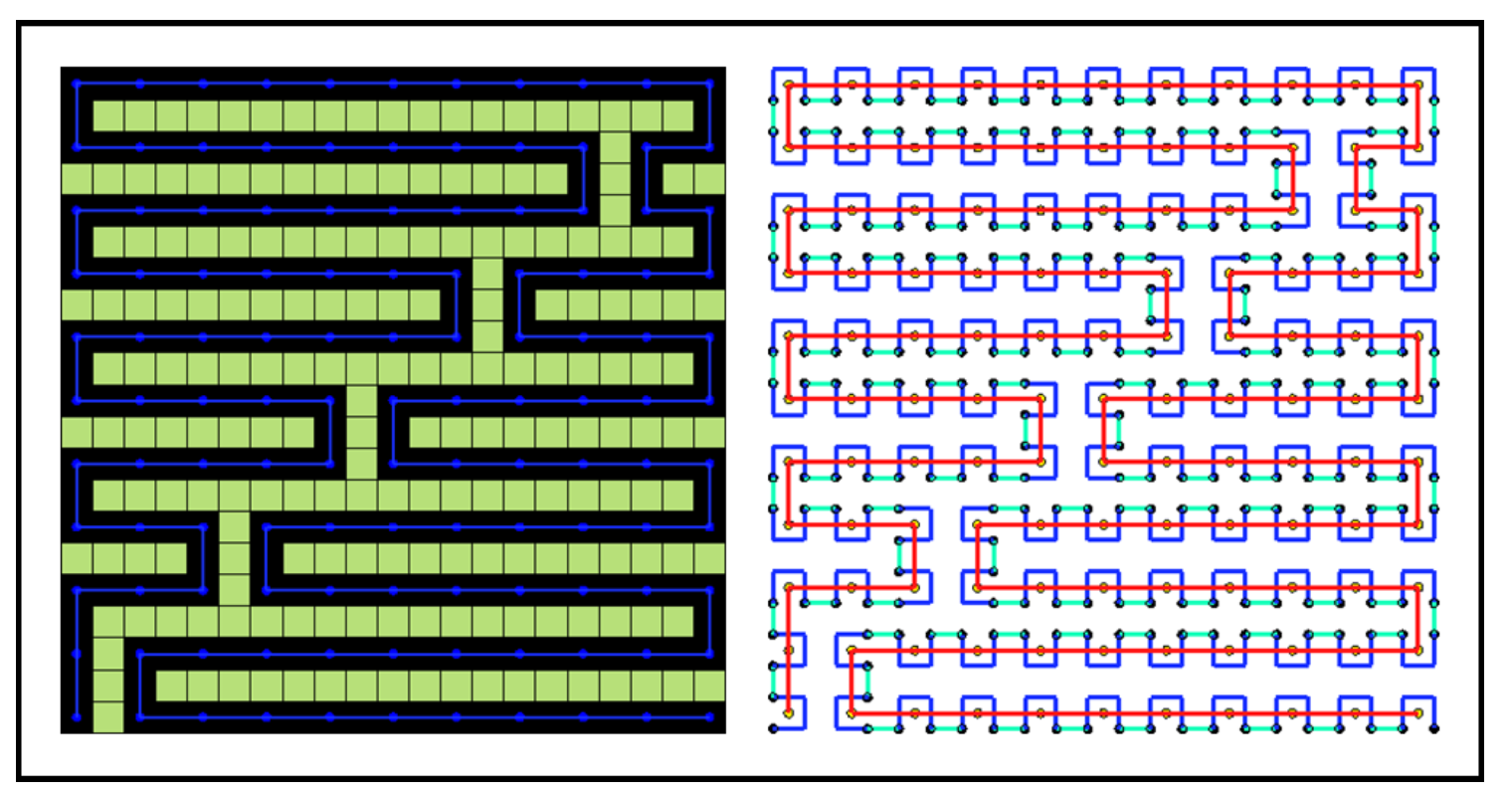 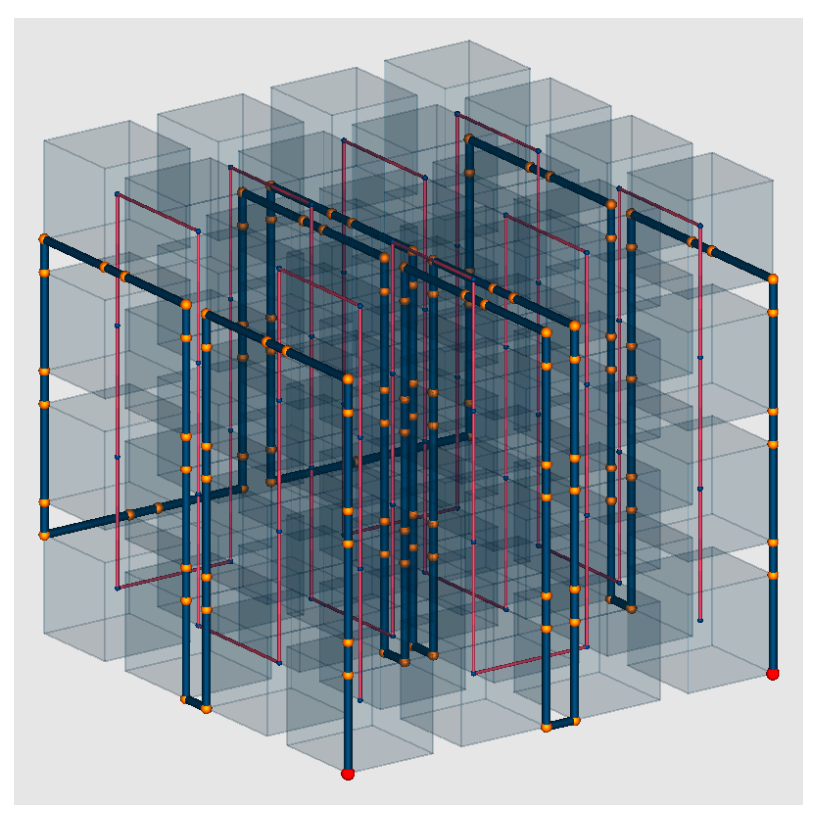 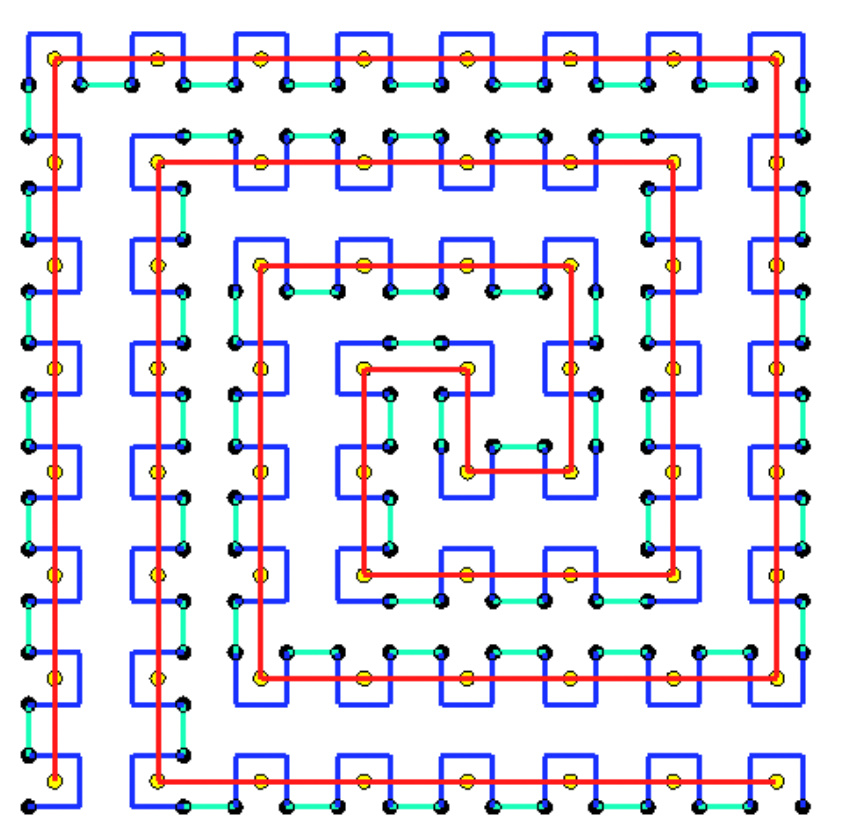 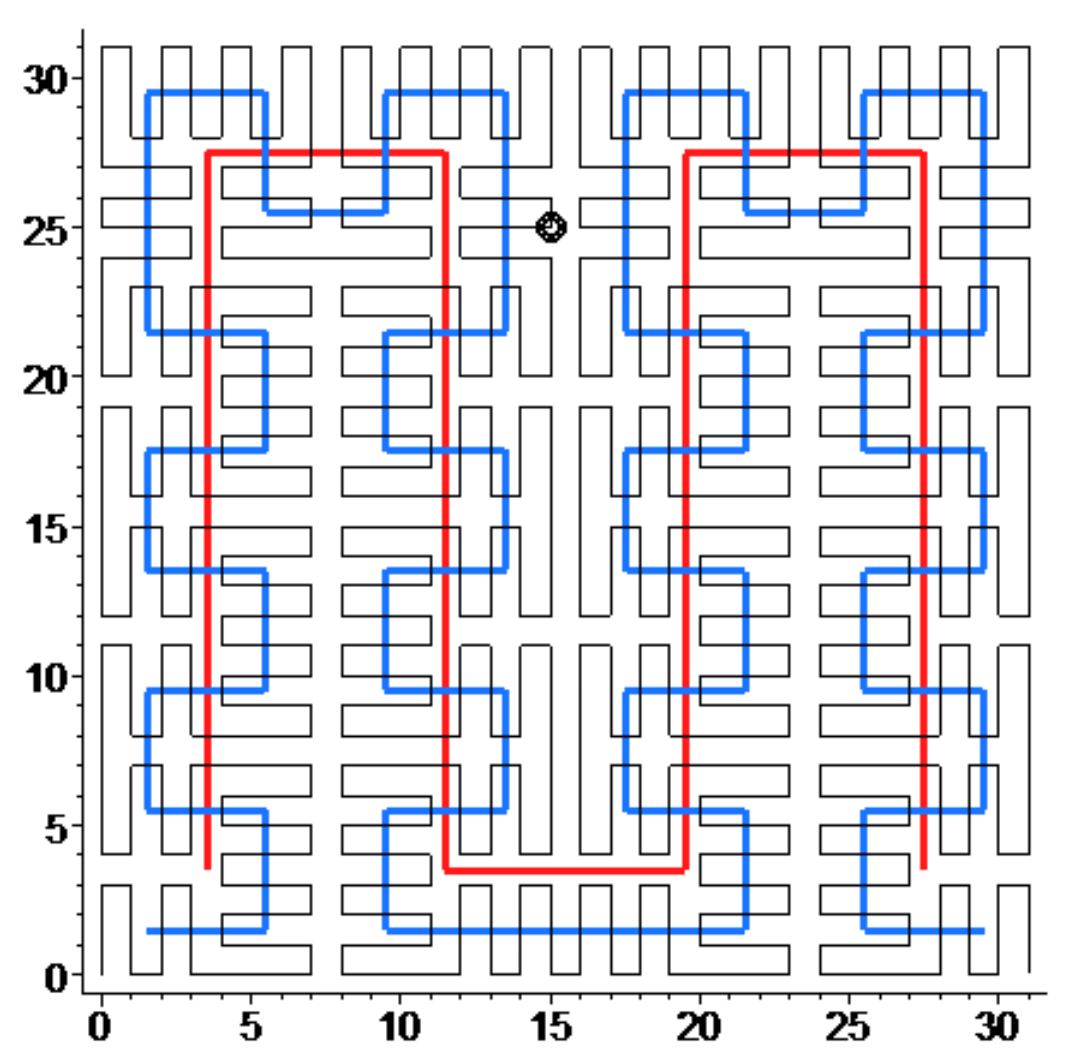 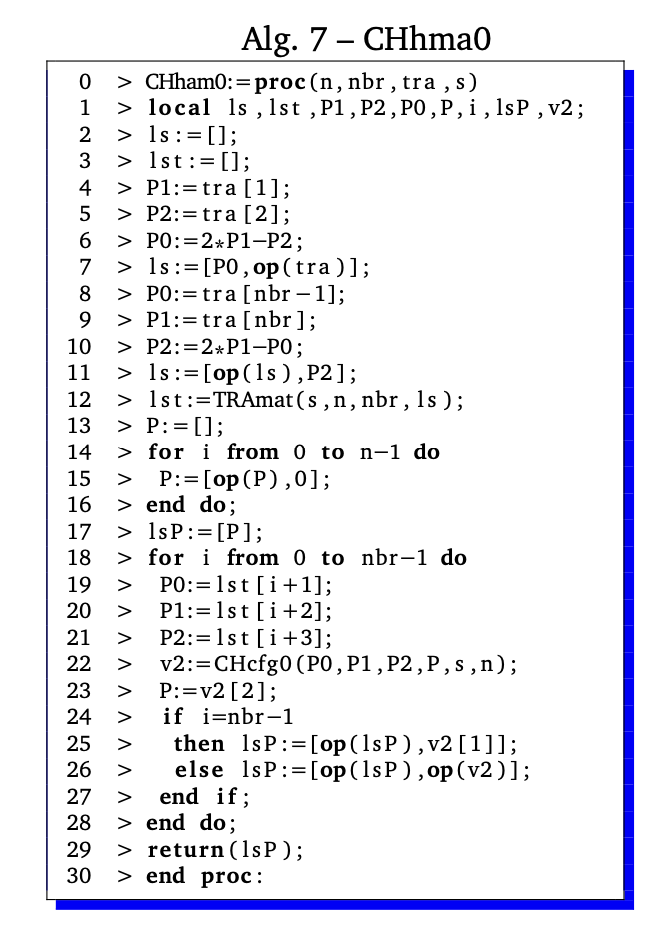 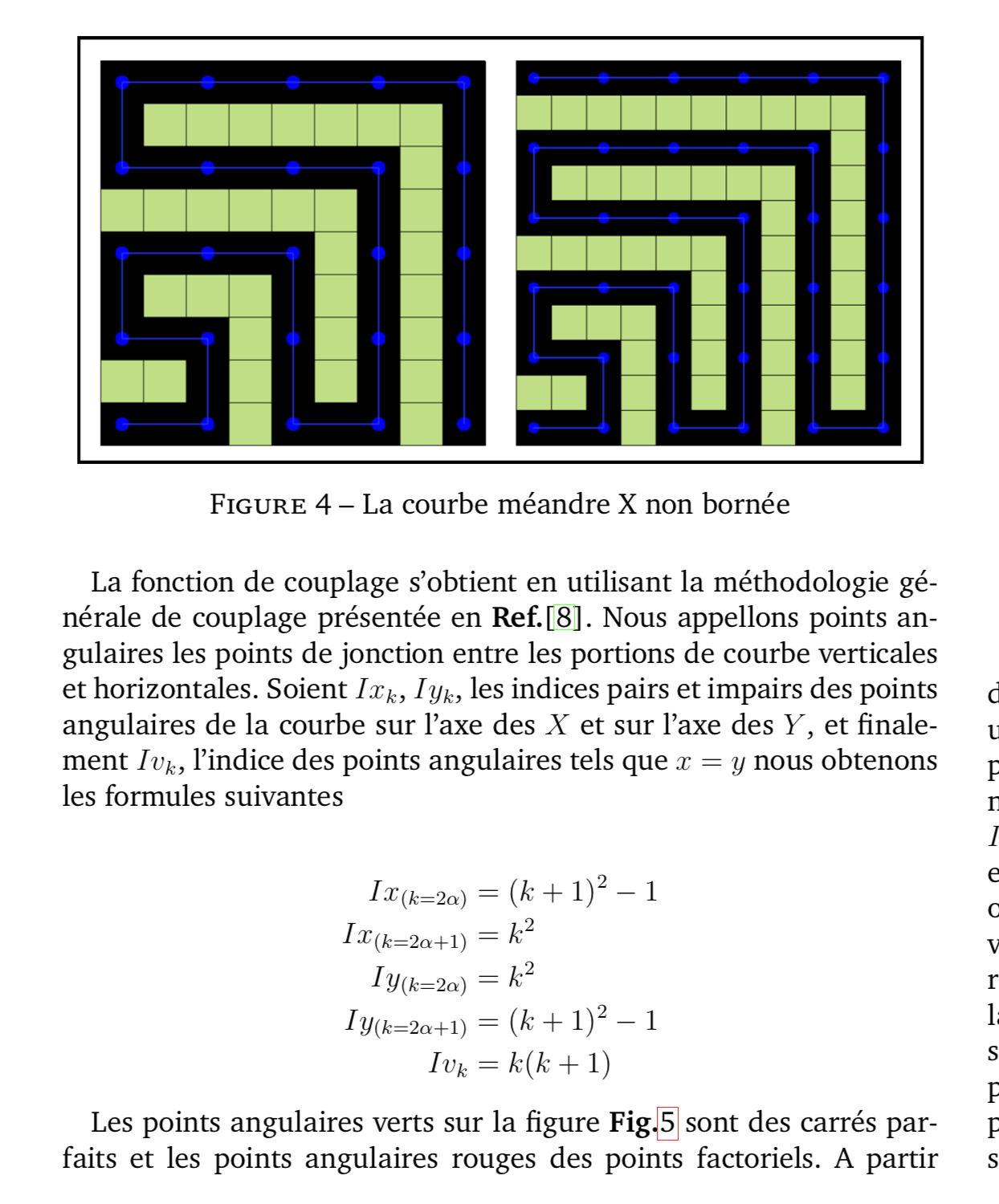